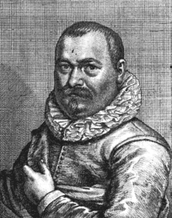 Roelant Savery (c. 1578-1639)
Roelant Savery was a Flemish printmaker, painter and draughtsman. He was born in Courtrai (Kortrijk). The Savery family arrived in Haarlem around 1585 as religious refugees. There Roelant was apprenticed to his elder brother Jacob Savery, with whom he moved to Amsterdam in 1591. Following Jacob’s death, Roelant went to Prague where he took a position as painter at the imperial court of Rudolf II. In 1613, Savery continued as court painter under Rudolf’s successor, Matthias. Yet in that same year, he returned to Amsterdam. He remained in the Netherlands for the rest of his life, working for a range of prominent patrons.
[Source]
more >
2