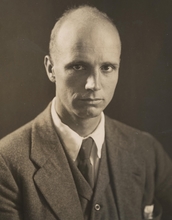 Rockwell Kent was born in Tarrytown, New York, the same year as fellow American artists George Bellows and Edward Hopper. Kent was of English descent. Kent lived much of his early life in and around New York City where he attended the Horace Mann School. In his mid-40s he moved to an Adirondack farmstead that he called Asgaard where he lived and painted until his death. Kent studied with several influential painters and theorists of his day. He studied composition and design with Arthur Wesley Dow at the Art Students League in the fall of 1900, and he studied painting with William Merritt Chase each of the three summers between 1900 and 1902, after which he entered in the fall of 1902 Robert Henri's class at the New York School of Art, which Chase had founded. During the summer of 1903 in Dublin, New Hampshire, Kent was apprenticed to painter and naturalist Abbott Handerson Thayer. An undergraduate background in architecture at Columbia University prepared Kent for occasional work in the 1900s and 1910s as an architectural renderer and carpenter. At the Art Students League he would meet and befriend the artists Wilhelmina Weber Furlong and Thomas Furlong. [source]
more >
4