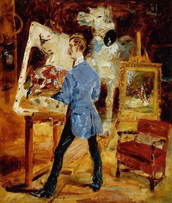 René Princeteau was born in Libourne into a noble family. He was deaf and mute from birth. He studied at the Institut National de Jeunes Sourds de Paris. After attending sculpture classes with Dominique Fortuné Maggesi, he enrolled in 1865 at the École nationale supérieure des Beaux-Arts, where he studied under the direction of Auguste Dumont. He rented a studio at 233 rue du Faubourg Saint-Honoré.

He was a friend of Alphonse de Toulouse-Lautrec, and tutored Henri de Toulouse-Lautrec in 1871. During the War of 1870, he enlisted in the artillery of army of the Loire. He then accumulated in his notebooks a lot of notes and drawings.

He rose to prominence with his horse paintings in 1885. He painted numerous hunting scenes with hounds, racing, as well as landscapes and equestrian portraits.

In 1883, Princeteau left Paris for Libourne where he originated. This period marks the beginning of his great compositions celebrating rural life. He settled in the castle of Pontus near Fronsac on the banks of the Isle. He died in Fronsac in 1914.
more >
7