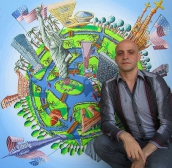 The artist, Raphael Perez, was born in 1965 and was raised in Jerusalem. He currently resides and works in Tel-Aviv. He is a graduate of the Jerusalem school of Visual Arts where he studied from 1988 through 1992 and where many of his acryllic, oil, laminated wood pieces and drawings can be found. Beginning in 1995, the artist's drawings depicted intimate relationships between two people whether man and woman, two women and two men. The entire concept of a relationship and sentiments between two people is brought to light. In each painting there is an evident contrast between shade and light. The color red is central to his paintings and consistently symbolizes masculinity, passion and dominance. Within each gallery, one can find a short paragraph of information regarding that particlular gallery.
Perez`s creations deal with the subject of homosexuality. He puts a strong emphasis on single-sex families, pride parades, soldiers, male birth giving, portraits, male nudity, as well as male, female and heterosexual couples. His paintings put to test the boundaries between eroticism and art, while characterizing gay relationships and love as they are expressed in everyday life.
Two primary styles dominate the Raphael Perez paintings:
NAIVE STYLE which has been influenced by my experience working with children.
REALISTIC STYLE in which red is the dominant color.
more >
17