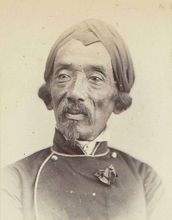 Raden Saleh Sjarif Boestaman (1811 – 23 April 1880)[1][2] was an Indonesian Romantic painter of Arab-Javanese ethnicity who pioneered modern Indonesian art. He was considered to be the first modern artist from Indonesia (then Dutch East Indies), and his paintings corresponded with nineteenth-century romanticism which was popular in Europe at the time. He also expressed his cultural roots and inventiveness in his work.

It was from Kruseman that Raden Saleh studied his skills in portraiture, and later was accepted at various European courts where he was assigned to do portraits. While in Europe, in 1836 Saleh became the first indigenous Indonesian to be initiated into Freemasonry. From 1839, he spent five years at the court of Ernest I, Duke of Saxe-Coburg and Gotha, who became an important patron.

From Schelfhout, Raden Saleh furthered his skills as a landscape painter. Raden Saleh visited several European cities, as well as Algiers. In The Hague, a lion tamer allowed Raden Saleh to study his lion, and from that his most famous painting of animal fights was created, which subsequently brought fame to the artist. Many of his paintings were exhibited at the Rijksmuseum in Amsterdam. Several of his paintings were destroyed when the Colonial Dutch pavilion in Paris was burnt in 1931.
more >
8