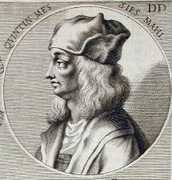 Massys was the leading painter in Antwerp in the early 16th century. He was born in Louvain and his earliest works show the influence of Memling, who had been active in Bruges. His later works show some Italian influence, particularly that of Leonardo. He was notable as a portraitist as well as a religious painter.

Massys is first recorded in Antwerp, on becoming a member of the guild there in 1491, when the town was beginning to assume importance as the main port of the Netherlands. There are dated and datable paintings by Massys from 1509 onwards, the year of the completion of his altarpiece of the 'Legend of Saint Anna' (now in the Brussels Museum).

In Antwerp, Massys was closely associated with Joachim Patinir, and seems to have supplied figures for his landscapes.
more >
1