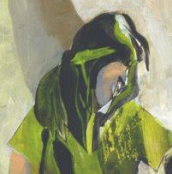 Ping Frederiks was born in Nijverdal, Netherlands, 1967.
She studied theatre make up by Janny Rison. In 1988 she went to Spain to have a creative stay in Seville. During these 4 years, she took part in many exhibitions in Spain. When she returned to the Netherlands, she opened a Studio in the city of Hengelo. She also kept working as a makeup artist in theatres and opera houses in different cities.
In 2002 she graduated at the Photo Academy in Apeldoorn and worked for several years as a photographer, decorator and artistic mural painter. Ping is a member of the artist group Nijverdal, Holland.
In 2008 Ping participated in the International Symposium "Atelier an der Donau" in Pöchlarn, Austria, where she won an award in the category painting. She decided to move to Austria, married Atanas Kolev, sculptor, and became a member of Atelier an der Donau since then.
Ping is a member of the "Union Plovdiv artists" Bulgaria and she took part in numerous exhibitions in many European countries.
more >
14