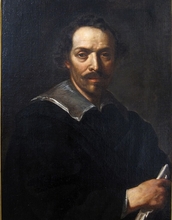 Pietro da Cortona (1 November 1596/7 – 16 May 1669) was born Pietro Berrettini, but is primarily known by the name of his native town of Cortona in Tuscany. He was the leading Italian Baroque painter of his time and, along with his contemporaries and rivals Gian Lorenzo Bernini and Francesco Borromini, was one of the key figures in the emergence of Roman Baroque architecture. He was also an important designer of interior decorations.
Cortona worked mainly in Rome and Florence. He is best known for his frescoed ceilings such as the vault of the salone or main salon of the Palazzo Barberini in Rome and carried out extensive painting and decorative schemes for the Medici family in Florence and for the Oratorian fathers at the church of Santa Maria in Vallicella in Rome. He also painted numerous canvases. Only a limited number of his architectural projects were built but nonetheless they are as distinctive and as inventive as those of his rivals. Despite the high regard he was held in during his lifetime, his present fame does not match the esteem bestowed on Caravaggio, Bernini, and Borromini. [Source]
more >
3