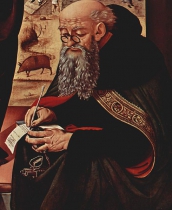 Piero di Cosimo (1462-1522)
Piero di Cosimo was born in Florence. At around eighteen he worked as an apprentice and pupil at the studio of painter Cosimo Rosselli. Together with Rosselli, he travelled in 1481 to Rome to help finish his master's fresco for the Sistine Chapel. In the late 1480s, Piero di Cosimo set up as an artist in his own right in Florence. Like his contemporary Leonardo da Vinci, he painted panoramic landscapes as a backdrop to his subjects.
Piero di Cosimo lived a reclusive life, surviving on a diet of hard-boiled eggs that he cooked in batches of fifty - at least according to 16th-century artist biographer Vasari. In later life, the painter suffered from a partial paralysis and was unable to work.[Source]
more >
10