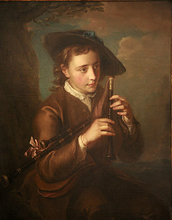 Philippe Mercier (also known as Philip Mercier; 1689 in Berlin – 18 July 1760 in London) was a French painter and etcher, who lived principally and was active in England. He was born in Berlin of French extraction, the son of a Huguenot tapestry-worker. He studied painting at the Akademie der Wissenschaften of Berlin and later under Antoine Pesne, who had arrived in Berlin in 1710. Later, he travelled in Italy and France before arriving in London—"recommended by the Court at Hannover"—probably in 1716. He married in London in 1719 and lived in Leicester Fields.

He was appointed principal painter and librarian to the Prince and Princess of Wales at their independent establishment in Leicester Fields, and while he was in favour he painted various portraits of royalty, and no doubt many of the nobility and gentry. Of the royal portraits, those of the Prince of Wales and of his three sisters, painted in 1728, were all engraved in mezzotint by Jean Pierre Simon, and that of the three elder children of the Prince of Wales by John Faber Junior in 1744. This last (entitled Playing Soldiers) was a typical piece of Mercier's composition, the children being made the subject of a spirited, if somewhat childish, allegory in their game of play. Prince George is represented with a firelock on his shoulder, teaching a dog his drill, while his little brother and sister are equally occupied in a scene that is aptly used to point a patriotic moral embodied in some verses subjoined to the plate, of which the concluding couplet is as follows:

“Illustrious Isle where either sex displays
Such early omens of their future praise!”

Faber also engraved six plates of "Rural Life" after Mercier, and several other subjects of his have survived him.

Mercier became involved in a scandal of sorts and he lost favour. He left London around 1740 and settled in York, where he practised portrait painting for over ten years, before returning to London in 1751. In 1752, Mercier went to Portugal at the request of several English merchants. He did not long remain there, however, but came back to London, where he died in 1760.

In August 2016 Mercier's painting Portrait of a Lady (1744) was one of the subjects for episode 19 in the 5th series of the BBC Television series Fake or Fortune?

Mercier's daughter Charlotte was also an artist in her early life, before turning to a life of dissolution and dying in the St James Workhouse two years after her father's death.