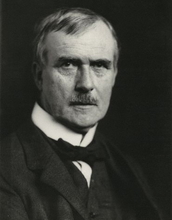 Philip Wilson Steer OM (28 December 1860 – 18 March 1942) was a British painter of landscapes, seascapes plus portraits and figure studies. He was also an influential art teacher. His sea and landscape paintings made him a leading figure in the Impressionist movement in Britain but in time he turned to a more traditional English style, clearly influenced by both John Constable and J. M. W. Turner, and spent more time painting in the countryside rather than on the coast. As a painting tutor at the Slade School of Art for many years he influenced generations of young artists.

Steer was born in Birkenhead, in Merseyside, near Liverpool, the son of a portrait painter and art teacher, Philip Steer (1810–1871) and his wife, Emma Harrison (1816-1898). When Steer was three years old the family moved to Whitchurch near Monmouth from where, after a period of home schooling, he attended the Hereford Cathedral School. After finding the examinations of the British Civil Service too demanding, he became an artist in 1878. He studied at the Gloucester School of Art and then from 1880 to 1881 at the South Kensington Drawing Schools. He was rejected by the Royal Academy of Art, and so studied in Paris between 1882 and 1884, firstly at the Académie Julian, and then in the École des Beaux Arts under Alexandre Cabanel, where he became a follower of the Impressionist school. In Paris he was greatly influenced by seeing works by Edouard Manet and James McNeill Whistler and the French impressionists. [source]
more >
2