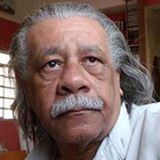 Acencio PAULO BARBOSA DE ARAUJO born in Juazeiro, Bahia, Brazil, the 30 day of June 1944. Resides in São Paulo since 1958. He studied drawing and painting in the studio of the master Roman Abedante 1962-1966. The classical training allowed him the use of various materials and techniques, absorbing a great versatility in the creation and execution of numerous styles and trends. His preferred technique is oil on canvas and his current style, the Fantastic Realism.

As a portraitist, the artist has done custom work for the general public, institutions, artists, politicians and businessmen. One of his biggest clients, Caixa Economica Federal, commissioned between 1998 and 2002, more than 30 portraits of presidents and famous figures of the institution, to compose the body of its galleries of São Paulo and Brasília. Other organizations that have painted works by Acencio: Bank Martinelli, Opus Dei, City of Osasco City of Ribeirão Pires, WIRE-Integrated College Ourimbah, among others.
more >
10