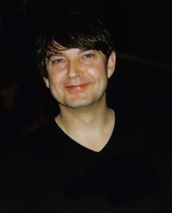 Paul Richard James was born in the Rhondda Valley, a mining community in South Wales, and moved to Canada in 1973. He attended the Ontario College of Art from 1984-1988 and studied with Graham Coughtry and Jim Tiley within the Experimental Arts Department. Paul later attended The University of Guelph and received a B.F.A., followed by a B.Ed. from Queens University.

In the early 1990’s Paul’s desire to work with the figure led him to the Michael John Angel School of Classical Realism located at Dundas & Keele in Toronto. Here Paul discovered the techniques associated with the academic tradition. During the mid to late 1990’s, his paintings became populated with figures, often appropriated from Fashion periodicals and mainstream media. These large-scale paintings formed the basis of the “Seduction” series.

In the early 1990’s, Paul became the Head of Visual Arts at S.E.E.D. Alternative School in Toronto and began to teach Academic Portrait Painting and figurative sculpture.

In 2009 Paul opened his own Atelier devoted to the Atelier method of drawing and painting in Hamilton Ontario. Well over two hundred students have been instructed in the classical technique at the Paul Richard James Atelier. Many have chosen to continue and have been with Paul for a number of years.
more >
12