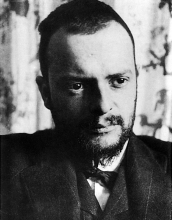 Born in Switzerland he is considered to be of Swiss German nationality. He was a watercolourist, painter and etcher of fantastic works, mostly small in scale; During the course of his career, he not only participated in various art movements, but he was also one of the leading forces in many of these movements. Some of the forms he worked on during his career include expressionism, cubism, and surrealism.
His training as a painter began in 1898 when he studied drawing and painting in Munich for three years. By 1911, he had returned to that city, where he became involved with the German Expressionist group Der Blaue Reiter (The Blue Rider), founded by Wassily Kandinsky and Franz Marc in 1911. His work was also influenced by the Cubism of Pablo Picasso and Georges Braque, and the abstract translucent color planes of Robert Delaunay.
In 1920, Walter Gropius invited Klee to join the faculty of the Bauhaus. A school of architecture and industrial design operating first in Weimar (1919–25) and then Dessau (1925–32), it also included the study of arts and crafts. Nearly half of Klee's some 10,000 works (mainly small-scale watercolors and drawings on paper) were produced during the ten years he taught at the Bauhaus, and they vary widely.
From 1931 to December 1933, Klee taught at the Academy of Fine Arts in Düsseldorf. When the National Socialists declared his art "degenerate" in 1933, Klee returned to his native Bern. Personal hardship and the increasing gravity of the political situation in Europe are reflected in the somber tone of his late work. He died in 1940.
more >
45