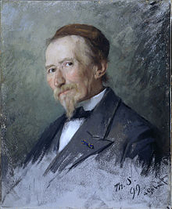 Paul Joseph Constantin Gabriël (1828-1903)
Paul Gabriel was born in Amsterdam. His father, a sculptor, died when he was five. The young Paul helped his mother support their large family by painting portraits. In 1840, Gabriel began following evening classes at Amsterdam’s Academy and worked for short periods with different teachers, including landscape painter Barend Cornelis Koekkoek. From 1853 to 1856 he lived in the village of Oosterbeek, near Arnhem. With fellow artists such as Anton Mauve and Gerard Bilders he focused on depicting nature. Following a brief stay in Amsterdam, he lived from 1860 to 1884 in Brussels and spent the remainder of his life in Scheveningen.
In Belgium, Gabriel continued to paint typically Dutch subjects, such as polder landscapes with mills and lakes. Unlike other artists of the Hague School he used clear, vivid colours.
more >
3