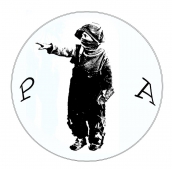 “Contemporary art must be unwanted to any form of power. It is a form of attacking to anything that bothers us.”

Panos is a self-taught, emerging artist from Greece. Originally being formed as an engineer, his art flair and life itself have transformed him into a conceptual artist. Panos spent some time of his life studying writers like Henry Miller, Jack London, Jack Kerouac, Allen Ginsberg, among others, charmed by the decadence of their writings.

He uses a number of mediums to give his concepts a satisfactory form. Oil, spray, collage, photography and installations are a few of them. Opposed to any kind of stereotype and influenced by Stirner’s individualistic theory, Panos’ art is mainly dealing with the society
and its people. He is moving the spectator beyond the conventional way of approaching the reality.

His core inspiration can be found in a number of social structures. Every piece is different in execution and concept. Panos considers art as a mean to evoke than to portray.