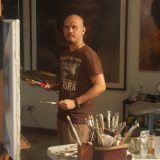 Orley is a Filipino realist painter from Toledo, Cebu, Philippines. He discovered a love for art at a very early age, doing portraits of himself and of family and friends throughout his growing years.

Orley left Cebu Province at 17 after a few semesters at the Cebu Institute of Technology taking up Architecture to make his mark in Manila. A series of jobs as an export handicraft artist led him all over the country from Pampanga, Paete, Laguna and Davao. He eventually returned to Cebu to study at the UP College of Fine Arts before leaving school to become a full-time artist.

Orley continues to paint his favorite scenes of life and culture while continuously evolving his traditional technique through study and awareness of contemporary art forms. He holds occasional exhibits in Metro Manila and is based in Pasig City, Philippines.
more >
18