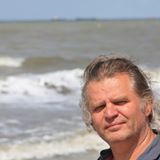 NIKOLAI REZNICHENKO was born in 1958 in Saratov region. Throughout his life he has had various experiences and occupations which have enriched him, in a variety of ways, as an artist, and made him what he presently is.

After graduating from an art college, Nikolai entered nautical one in Kerch. He was on his military duty in Kiev, afterwards there followed the period of studying architecture and arts in Krasnodar.

From 1982 Nikolai had lived in Kostomuksha, town of Karelia, north-west region of Russia neighboring with Finland, where he was involved into construction works. He also used to teach painting and graphic in the local school. It was in Karelia in 1986 where his first exhibition took place. Its success determined his works getting involved into many other exhibitions.

To a considerable extent his art was influenced by the art of orthodox icon, originally - when he used to deal with reproductions for books, and subsequently, when he had direct experience of working with icons and restoring them.
more >
20