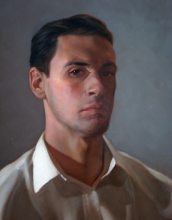 Niklas’ work shows a personal vision of visual imprints from a modern context. This vision is marked and inspired by realist painters from older times, but becomes highly his own.
more >
17