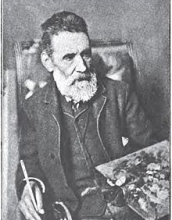 Nikiphoros Lytras (1832, Pyrgos, Tinos – June 13, 1904, Athens) was a nineteenth-century Greek painter. He was born in Tinos, and trained in Athens at the School of Arts. In 1860 he won a scholarship to Royal Academy of Fine Arts of Munich. After completing these studies, he became a professor at the School of Arts in 1866, a position he held for the rest of his life. He remained faithful to the precepts and principles of the academaism of Munich, while paying greatest attention both to ethographic themes and portraiture.