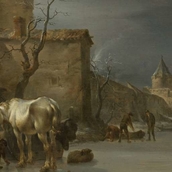 Nicolaes Pietersz. Berchem (1621/1622-1683)
Nicolaes or ‘Claes’ Berchem was the son of still life painter Pieter Claesz of Haarlem. It was from his father that he received his first lessons, and later also from landscape artist Jan van Goyen. Berchem’s earliest paintings were landscapes executed in brown and yellow tints, and emulating Van Goyen’s typically loose style. Berchem may have visited Italy in the 1650s, although this remains uncertain. Later, he developed a more colourful palette and ranks among the second generation of Itanianists: Dutch painters who specialised in sundrenched landscapes and scenes set in the Italian countryside.