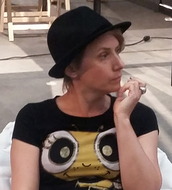 MONIKA DĘTKOŚ is a Polish artist, born in 1974 in Bydgoszcz.
She graduated from the Faculty of Graphics at the High School of Art in Bydgoszcz in 1994.
She received a diploma at the Faculty of Painting and Graphics from prof. Kiejstut Bereźnicki in 2001.
She lives and works in Sopot.
She was a finalist in the Competition ″Image of the Year 2004″ for the magazine Art & Business.
She took part in an exhibition at the Xawery Dunikowski Museum of Sculpture at the Królikarnia Palace in Warsaw.
In 2008 she received an award in the Worldwide Painting Competition ″Public Space Picture " at PROFIL, „Zamek" Culture Centre, Poznań.
In 2009 she was awarded the City of Rome prize - Diploma di Merito in Italy.
In 2011 she gave a painting presentation at the Great Exhibition of Contemporary Painting, 100 + 1 ,, Beautiful Paintings,, Exhibition and Auction, DAP Gallery, Warsaw.
In 2011 she participated in numerous solo and group exhibitions throughout Poland and abroad.