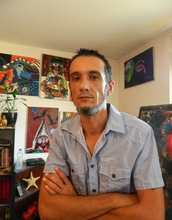 EDUCATION
University of Arts in Belgrade
The first year of postgraduate studies, Theory of Art and Media, 2006 – 2007

ORGANIZATIONS
Association of Fine Artists of Serbia
Member 2011 to Present

2001 he exhibited at the Biennale of young artists from Europe and Mediterranean in Sarajevo, Bosnia and Hercegovina

From 2000 to 2005 several students collective exhibition of graphics and drawings.

2015 Solo exhibition "The similarity of the existence" - The cafe gallery Friday, Belgrade, Serbia