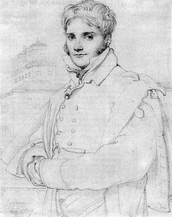 25 July 1781 – 12 June 1853) was a French history painter of the Neoclassical school. He was a winner of the prestigious Prix de Rome in 1803. After the salon of 1824, he was bestowed with the rank of Knight in the order of the Legion d'Honneur by Charles X of France and offered a professorship at the École nationale supérieure des Beaux-Arts: a position in which he remained until his death in 1853. In 1832, he was elected to a seat at the Académie des Beaux-Arts in Paris,

Blondel was a student of the Neoclassical master Baron Jean-Baptiste Regnault and from 1809, a lifelong friend of the painter Ingres.

For much of Blondel's painting career, he was occupied with public commissions for paintings and frescoes in important buildings, including palaces, museums and churches. Blondel completed major commissions for the Palace of Fontainebleau, the Palace of Versailles, the Louvre Museum, the Brongniart Palace (also known as the Paris Bourse), the Luxembourg Palace, and the churches of St.Thomas Aquinas and Notre-Dame-de-Lorette.

Blondel's 1814 painting La Circassienne au Bain became infamous during the early part of the 20th century for being the subject of the largest claim for financial compensation made against the White Star line, for a single item of luggage lost by a passenger on the RMS Titanic.
more >
3