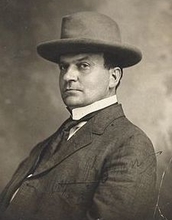 Max Bohm was an American artist who spent much of his time in Europe.

Bohm was born in Cleveland, Ohio. He studied at the Académie Julian in Paris and travelled in Europe. Between 1895-1904 he made his home at the Etaples art colony. Described as a romantic visionary, his heroic depiction of Étaples fishermen received a gold medal at the Paris Salon in 1898. He went on to teach painting at a school in London until 1911 before returning to the United States to join the school of artists in Cape Cod.

Bohm became a National Academician in 1920, dying three years later in Provincetown, a town at the tip of Cape Cod. His paintings are part of the Smithsonian Institution, the National Gallery of Art, the Luxembourg Gallery in Paris and there is a mural in his home town at the Cuyahoga County Courthouse.