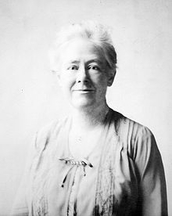 Mary Morris Vaux Walcott (July 31, 1860 – August 22, 1940) was an American artist and naturalist known for her watercolor paintings of wildflowers. She has been called the "Audubon of Botany."

Mary Morris Vaux[a] was born in Philadelphia, Pennsylvania, to a wealthy Quaker family. After graduating from the Friends Select School in Philadelphia in 1879, she took an interest in watercolor painting. When she was not working on the family farm, she began painting illustrations of wildflowers that she saw on family trips to the Rocky Mountains of Canada.[3] During the family summer trips, she and her brothers studied mineralogy and recorded the flow of glaciers in drawings and photographs.[4] The trips to the Canadian Rockies sparked her interest in geology.

In 1880, at the age of nineteen, Vaux took on the responsibility of caring for her father and two younger brothers when her mother died.[5] After 1887, she and her brothers went back to western Canada almost every summer. During this time she became an active mountain climber, outdoors woman, and photographer. Asked one summer to paint a rare blooming arnica by a botanist, she was encouraged to concentrate on botanical illustration. She spent many years exploring the rugged terrain of the Canadian Rockies to find important flowering species to paint. On these trips, Vaux became the first women to accomplish the over 10,000 feet ascent of Mount Stephen.[6] In 1887, on her first transcontinental trip via rail, she wrote an engaging travel journal of the family's four-month trek through the American West and the Canadian Rockies.

Over her father's fierce objections, Mary Vaux married the paleontologist Charles Doolittle Walcott, who was the Secretary of the Smithsonian Institution, in 1914, when she was 54. She played an active part in her husband's projects, returning to the Rockies with him several times and continuing to paint wildflowers. In 1925, the Smithsonian published some 400 of her illustrations, accompanied by brief descriptions, in a five-volume work entitled North American Wild Flowers, the proceeds of which went to the Smithsonian's endowment. In Washington, Mary became a close friend of First Lady Lou Henry Hoover and raised money to erect the Florida Avenue Meeting House, so that the first Quaker President and his wife would have a proper place to worship. From 1927 to 1932, Mary Vaux Walcott served on the federal Board of Indian Commissioners and, driven by her chauffeur, traveled extensively throughout the American West, diligently visiting reservations.

When she was 75, she made her first trip abroad to Japan to visit lifelong friend and fellow Philadelphia Quaker, Mary Elkington Nitobe, who had married Japanese diplomat Inazo Nitobe.

She was elected president of the Society of Woman Geographers in 1933. In 1935, the Smithsonian published Illustrations of North American Pitcher-Plants, which included 15 paintings by Walcott. Following the death of her husband in 1927, Walcott established the Charles Doolittle Walcott Medal in his honor. It is awarded for scientific work on pre-Cambrian and Cambrian life and history. Walcott died in St. Andrews, New Brunswick.