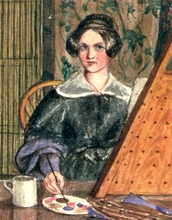 Mary Ellen Best (1809 – 1891) was an English artist. Most active in the 1830s, she usually worked in water-colour, commonly painting scenes of domestic life.
Best was born in York in 1809, the daughter of doctor Charles Best, (associated with Bootham Park Hospital from 1804-1815) and his wife, Mary Norcliffe Dalton. Best grew up on Little Blake Street near the York Minster. At the age of six (1815), Best's family moved to Nice in France for three years, where Mary Ellen Best's father died in 1817; the family returned to England in 1818. Mary Ellen's father left £1,000 to both her and her sister, to be inherited at the age of 21. Best attended a boarding school in her teens during which time she received lessons from a well qualified art teacher, George Haugh. Like many middleclass women, she was educated in painting and drawing for leisurely pleasure and to attract a suitable husband. However, she achieved a level of success above that of an amateur, and she decided to continue her artistic pursuits.
After 1828, she left boarding school and started to demonstrate her dedication to art. She was tutored by George Haugh (1755–1827), an art exhibitor. She continued her art in York, her hometown, and between 1830 and 1836, her most active years as an artist, Best exhibited at venues in London, Leeds, Newcastle, York, and Liverpool. In 1830, one of her still lifes was awarded a silver medal from the London Society for the Encouragement of Arts, Manufactures and Commerce (now the Royal Society of Arts) as "the best original composition, painted in oil or water-colours . . . by persons under the age of twenty-one." During 1934, the height of her artistic life, she visited Frankfurt, where she developed her skills further and sold more paintings.
In 1840 Best married Johann Anton Phillip Sarg, a schoolteacher who would have had access to considerably fewer funds than Best. Best's mother was a part of the Norcliffe family, who owned the Langton Park estate.[8] This meant that on her father's death she inherited a substantial fortune. This fortune has been blamed for her withdrawing from the art world in her 50s. Her son Charles Francis Sarg was a diplomatic consul representing Germany in Guatemala, and his son Anthony Frederick Sarg was a puppeteer and illustrator known as Tony Sarg.
Best died in 1891 in Darmstadt.[source]
more >
1