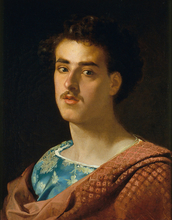 The work which Fortuny (1838-1874), a Spanish painter, accomplished during his short life is distinguished by a superlative facility of execution and a marvellous cleverness in the arrangement of brilliant hues, but the qualities of his art are those that are attainable by a master of technical resource rather than by a deep thinker. His insight into subtleties of illumination was extraordinary, his dexterity was remarkable in the extreme, and as a colorist he was vivacious to the point of extravagance. At the same time in such pictures as La Vicaria and Choosing a Model, and in some of his Moorish subjects, like The Snake Charmers and Moors playing with a Vulture, he showed himself to be endowed with a sensitive appreciation of shades of character and a thorough understanding of the peculiarities of a national type. His love of detail was instinctive, and he chose motives that gave him the fullest opportunity of displaying his readiness as a craftsman.
more >
4