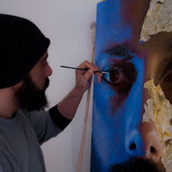 He was born in Syracuse in 1974. His passion for art began at age six when, in addition to drawing, she began painting. Constantly evolving has always wanted to explore the use of different techniques, from tempera to acrylic and oil. His artistic education was first formed at the Art School of Rome and later the Academy of Fine Arts in Rome. He graduated in 1998 at the Academy with honors. The passion for experimentation leads him, for a few years, to also explore the digital world, while never abandoning traditional painting. The various experiences led him to undertake a hyperrealistic / photorealistic path that continues in his recent artistic production.

His works are in public and private collections in Italy and abroad.
In 2016 one of his works became permanently part of MacS Museum (Contemporary Art Museum Sicily).

He currently lives and works in Rome.
more >
3