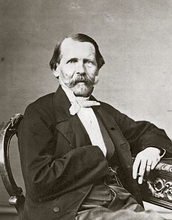 Magnus von Wright (13 June 1805 – 5 July 1868) was a Swedish-Finnish painter, ornithologist and educator. In addition to bird illustrations, he was also known for his landscapes.

Magnus von Wright was born at the village of Haminalahti in Kuopio, Finland. His ancestors included Scottish merchants who had settled in Narva during the 17th-Century. His father Henrik Magnus von Wright was a retired Major who owned the family estate, Haminalahden. He was the eldest in a family of nine surviving children. His brothers Wilhelm von Wright (1810– 1887) and Ferdinand von Wright (1822-1906) also became artists.

He attended high school in Turku Gymnasium from 1823–25. It was there that he first developed his interest in birds and, although not a university student, was able to join the scientific society Societas pro Fauna and Flora Fennica organized by Carl Reinhold Sahlberg (1779-1860).

His first professional work came when he was asked to provide illustrations for Otava eli suomalaisia huvituksia (Stockholm: C. A. Gottlund. 1828), a three-volume compendium of Finnish culture and history, prepared and published by Carl Axel Gottlund (1779–1860).

After completing his work on Otava, he was employed by Swedish ornithologist Nils Bonde. Assisted by his brother Wilhelm, he provided illustrations for the multi-volume Svenska Fåglar (Stockholm: C. von Scheele. 1828).

Upon his return to Finland, he worked as a cartographer for the land survey office. From 1845 to 1849, he was a taxidermist at the University of Helsinki's Zoological Museum and taught drawing at the University from 1849 to 1868.

In 1857, he made a study trip to Düsseldorf, where he created a series of still-lifes. Two years later, he published his own work on Finnish birds. He also spent many years helping to reconstruct the botanical and zoological collections that had been destroyed in the Great Fire of Turku. His paintings of Helsinki and its environs are considered to be of great historical value.

In 1846, he was elected to the board of directors of the Finnish Art Association and held this position until his death in 1868 at Helsinki.