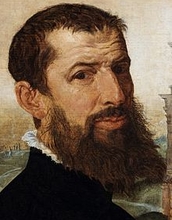 Maarten van Heemskerck (1498-1574)
As his name suggests, Maarten van Heemskerck was born in Heemskerk. In Haarlem, he was taught by Cornelis Willemsz and the latter’s pupil Jan van Scorel. Like Scorel, in 1532 Van Heemskerck travelled to Rome. There he studied Classical architecture and Renaissance art. Four years later he returned and settled in Haarlem, where he remained. Van Heemskerck painted biblical, mythological and allegorical scenes, as well as being a popular portraitist. He also designed hundreds of prints. He was the first in the Northern Netherlands to tackle printmaking in an efficient, modern way, making detailed designs that professional engravers such as Dirck Coornhert and Philip Galle transferred to copperplate, while leaving the production and distribution to a publisher.
more >
1