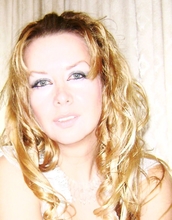 Born in Mexico City from an artistic family, Mariana developed since childhood the love for the fine arts. Her mother, a professional pianist and painter was the most influential person in her life. Mariana studied Graphic Design in the prestigious Universidad Iberoamericana where she acquired techniques and an educated appreciation for painting. These appreciation later on would become pillar in transforming and transporting her senses into a surreal world amalgamating vivid colors with oil and canvas, explosions of energy and optimism. Her distinctive signature, Sirens bring to us a world of mysticism and unparallel fantasy.
Mariana Tapia has received numerous recognitions: Grafica de Oro Prize, Circulo Nacional de Periodistas Prize, Las Palmas de Oro 2009 Prize.
She has been exhibiting her work at different expositions in Mexico City, San Antonio TX, Los Angeles CA, Miami FL, Coral Gables FL, Spain, Punta del Este Uruguay to mention a few. Also she was the representative of the category of plastic arts into the Museo de la Ciudad de Mexico special event called Las Tres Gracias, performing with great flutist Horacio Franco and writer Paco Ignacio Taibo II.
In 2009 she was awarded the Las Palmas de Oro Prize for being considered among the twenty most influential personalities into the Mexican Contemporary world of Art.
In March 2010 she received a recognition for her work in the Festival de Musica y Poesia de Primavera, event hold in the Museo de la Ciudad de Mexico.
In 2010 she was awarded the National Award of the Woman in the category of Excellence in Arts, award given by the CANADEM, a pro women nonprofit organization.
In 2011 he was part of the group show "Factory of Dreams" at the Centro Cultural San Angel. The sponsors of this exhibition were Jose Luis Cuevas and Leonardo Nierman.
In 2013 conducted a multidisciplinary art exhibition in NATIONAL ART MUSEUM (MUNAL) was named "Discovery of New Worlds"
In 2014 she received the recognition “Alex Soria” by the CEAPRAJ fraternity in the National Congress of Leaders 2014 ceremony held in the Grand Lodge Valle de Mexico.
In the same year, he made two exhibitions in the Superior Court of the Federal District, in two different locations of this important site.
more >
1