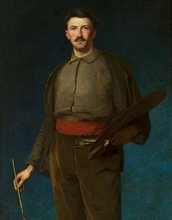 Born November 21, 1868 in Jaronowice, he came from a French Protestant family who emigrated to Poland in the 18th century.

He studied at the Kraków School of fine arts from 1884 to 1890, under Józef Mehoffer and for two years he studied painting at the Academy of fine arts in Munich under Otto Seitz. He then went to Paris on a permanent basis, but he travelled to Brittany, London and Oxford. Often living in poverty, contributed to the development of tuberculosis, of which he died at the age of 25 years. Known for his many romances, the most famous of which was his affair with a count's daughter Iwona Prośnieńska from the town of Olkusz. He also had a fiancee, Maria Pareńska.