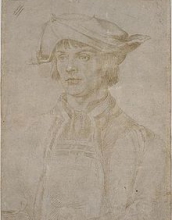 Lucas van Leyden (1494–1533)
Lucas van Leyden was the son of artist Hugo Jacobsz of Leiden. He was apprenticed first in his father's studio, and later to the painter Cornelis Engebrechtsz. Van Leyden’s development as an artist was fast and furious and he soon emerged as a successful painter and engraver.
In 1521, Van Leyden met Albrecht Dürer of Germany, whose compositions and use of chiaroscuro had a profound effect on his work. He was also fascinated by prints based on Rafael’s work. From these, he learned to depict the human physique with anatomical accuracy and in all kinds of positions. In addition to drawings and paintings, Van Leyden also made woodcuts and experimented with etching techniques. He developed a completely individual style, characterised by the distinctive physiognomy of his faces. He died a lingering death at the age of 39 from tuberculosis.
more >
8