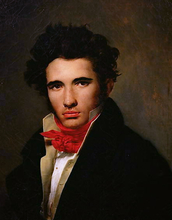 Léon Cogniet (29 August 1794 – 20 November 1880) was a French history and portrait painter. He is probably best remembered as a teacher, with over one hundred well-known students.

He was born in Paris. His father was a painter and wallpaper designer. In 1812, he enrolled at the École des Beaux-arts, where he studied with Pierre-Narcisse Guérin. He also worked in the studios of Jean-Victor Bertin. After failing an attempt to win the Prix de Rome in 1816, he won the following year with his depiction of "Helen Rescued by Castor and Pollux" and received a stipend to study at the French Academy in Rome until 1822. Before leaving, he had his first exhibition at the Salon.

In 1827, he created a series of murals on the life of Saint Stephen for the church of Saint-Nicholas-des-Champs. From 1833 to 1835, he painted a scene from Napoleon's expedition to Egypt on one of the ceilings at the Louvre. Between 1840 and 1860, he operated a popular painting workshop for women, directed by his sister Marie Amélie and one of his students, Catherine Caroline Thévenin (1813–1892), who later became his wife. After 1843, he concentrated almost entirely on teaching, with an occasional portrait. After 1855, he essentially gave up painting.

After 1831, he taught design at the Lycée Louis-le-Grand. He also taught at the École polytechnique from 1847 to 1861. In 1851, he was appointed a Professor at the École des Beaux-arts, a position he held until 1863, when he retired, slowly giving up his private students and becoming more reclusive .

He died forgotten in the 10th arrondissement of Paris in 1880 and is interred at Père-Lachaise.