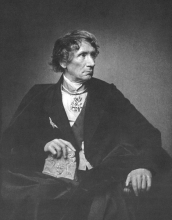 An architect, painter, and writer, Leo von Klenze (b. 1784, Schladen, Germany - d. 1864, Munich) is most noted for his work as court architect to Ludwig I, king of Bavaria. He designed streets, squares, and numerous monumental buildings that set the scale and tone of Munich, the Bavarian capital. His other European commissions ranged from Athens, where he was the first to take steps to preserve the Acropolis, to Saint Petersburg, Russia. In addition to building, Von Klenze studied public building finance, designed and arranged museum galleries of ancient art, and was an accomplished painter. His paintings exhibit a richness of detail and special attention to light and compositional space. He successfully combined his talent for sharp observation with an equal and complementary ability to improve upon nature. On his visits to Italy, he both drew and painted landscapes and examined the remains of Greek temples as sources for his archaeological Greek style.