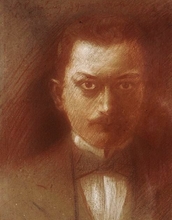 There is a variety of information on his youth and studies and it is mutually contradictory. He probably took his first painting lessons in Egypt during 1894-1895 from the German artist Karl Wilhelm Diefenbach and in 1895/1896 went to Vienna where he completed his studies at the Royal Academy of Fine Arts (1897-1903) and the Conservatory.

In 1903 he came to Greece for the first time and the same year took part in the International Exhibition of Athens, at which he received the silver medal. Remaining in Greece for five years, he travelled to various parts of it, painting and producing icons for churches. From 1909 to 1911/1914 he lived in Paris, where he took part in various Salons among which was the Autumn Salon of 1910 where his work Slope was awarded a prize. Returning to Greece he settled for a time in Corfu, took Greek citizenship and became a member of the literary and artistic group Company of Nine. In 1917 he came permanently to Athens and, along with other artists founded the Art Group. In 1919 he was commissioned by the Attican League to do the painting in the church of Ayios Alexandros in Palaio Faliro. The next year he presented at Zappeion Hall a large retrospective exhibition, for which he was awarded the National Prize in Letters and Arts and thus established himself as an artist, but raising a storm of reaction in conservative academic circles. In 1934 he took part in the Venice Biennale, in 1937 the International Exhibition of Paris where his work The Battle of Hercules with the Amazons won the gold medal, while in 1938 he organized a retrospective exhibition in the framework of the Venice Biennale, where his work Annunciation was purchased by the Museum of Venice.

In 1929, by a Presidential decree of Alexandros Papanastasiou, who was also his close friend, he was appointed a professor at the School of Fine Arts, after an unsuccessful attempt at being elected to it in 1923. This fact created a hostile atmosphere between him and his colleagues, but he was very popular among his students. He taught at the School until 1947 when he quit. For a while he continued to teach at his studio but by 1948 he had withdrawn into himself and stopped having any real contact with the world. This had been preceded by his participation in the Panhellenio exhibition of that year where he exhibited the Apotheosis of Athanasios Diakos which received special praise and was recommended for the first prize and the gold medal. The fact that in the end it did not receive them coupled with his departure from the School and a long-term dispute with the Municipality of Athens over the commissioning of twelve paintings in 1940, which in the end were not delivered, exacerbated his isolation.

In 1954 he was awarded the Order of the Commander of King George I and in 1965 the Order of the Gold Commander of the Phoenix, while in 1966 his students organized at the Athenian Technological Institute an exhibition of his work from public and private collections, but he himself did not make an appearance.
Parthenis is one of the most important figures in modern Greek art, both for his work and for his contribution through teaching. In his painting, which includes religious subjects, landscapes, mythological and allegorical motifs, portraits, and still lifes, drawing his inspiration from ancient and Byzantine art but also from modern currents -impressionism and post-impressionism, symbolism and Art Nouveau – he fashioned a completely unique and personal style, with which he transformed his ideas and visions into images, opening the road for the revitalization of Greek art.
source