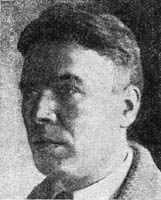 Vialov studied textile design at the Stroganov Moscow State University of Arts and Industry from 1914-1917 and, after the revolution, continued his studies at the state art and technical schools Svomas and Vkhutemas under Wassily Kandinsky, Vladimir Tatlin, Aristarkh Lentulov, and David Shterenberg. From 1922-1925, Senkin served as head of the Studio of Visual Arts for Teenagers, operated by Narkompros. Senkin joined the Artists' Union of the USSR in 1932, the year of its founding, and from 1941-45 designed a series of posters for the Telegraph Agency of the Soviet Union (TASS), which were exhibited at the Art Institute of Chicago in 2011 as part of the exhibition Windows on the War: Soviet TASS Posters at Home and Abroad, 1941–1945. Vialov died in Moscow in 1976.