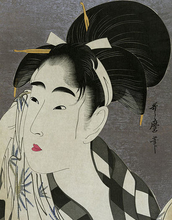 Kitagawa Utamaro (Japanese: 喜多川 歌麿; c. 1753 – 31 October 1806) was a Japanese artist. He is one of the most highly regarded designers of ukiyo-e woodblock prints and paintings, and is best known for his bijin ōkubi-e "large-headed pictures of beautiful women" of the 1790s. He also produced nature studies, particularly illustrated books of insects.

Little is known of Utamaro's life. His work began to appear in the 1770s, and he rose to prominence in the early 1790s with his portraits of beauties with exaggerated, elongated features. He produced over 2000 known prints and was one of the few ukiyo-e artists to achieve fame throughout Japan in his lifetime. In 1804 he was arrested and manacled for fifty days for making illegal prints depicting the 16th-century military ruler Toyotomi Hideyoshi, and died two years later.

Utamaro's work reached Europe in the mid-nineteenth century, where it was very popular, enjoying particular acclaim in France. He influenced the European Impressionists, particularly with his use of partial views and his emphasis on light and shade, which they imitated. The reference to the "Japanese influence" among these artists often refers to the work of Utamaro.

Background
Ukiyo-e art flourished in Japan during the Edo period from the seventeenth to nineteenth centuries. The artform took as its primary subjects courtesans, kabuki actors, and others associated with the ukiyo "floating world" lifestyle of the pleasure districts. Alongside paintings, mass-produced woodblock prints were a major form of the genre. Ukiyo-e art was aimed at the common townspeople at the bottom of the social scale, especially of the administrative capital of Edo. Its audience, themes, aesthetics, and mass-produced nature kept it from consideration as serious art.

In the mid-eighteenth century, full-colour nishiki-e prints became common. They were printed by using a large number of woodblocks, one for each colour.[3] Towards the close of the eighteenth century there was a peak in both quality and quantity of the work. Kiyonaga was the pre-eminent portraitist of beauties during the 1780s, and the tall, graceful beauties in his work had a great influence on Utamaro, who was to succeed him in fame.[5] Shunshō of the Katsukawa school introduced the ōkubi-e "large-headed picture" in the 1760s. He and other members of the Katsukawa school, such as Shunkō, popularized the form for yakusha-e actor prints, and popularized the dusting of mica in the backgrounds to produce a glittering effect.

Early life
Little is known of Utamaro's life. He was born Kitagawa Ichitarō[a] in c. 1753.[9] As an adult, he was known by the given names Yūsuke, and later Yūki.[c][10] Early accounts have given his birthplace as Kyoto, Osaka, Yoshiwara in Edo (modern Tokyo), or Kawagoe in Musashi Province (modern Saitama Prefecture); none of these places has been verified. The names of his parents are not known; it has been suggested his father may have been a Yoshiwara teahouse owner, or Toriyama Sekien,[9] an artist who tutored him and who wrote of Utamaro playing in his garden as a child.

Apparently, Utamaro married, although little is known about his wife and there is no record of their having had children. There are, however, many prints of tender and intimate domestic scenes featuring the same woman and child over several years of the child's growth among his works.

[b]Apprenticeship and early work
Sometime during his childhood Utamaro came under the tutelage of Sekien, who described his pupil as bright and devoted to art.[11] Sekien, although trained in the upper-class Kanō school of Japanese painting, had become in middle age a practitioner of ukiyo-e and his art was aimed at the townspeople in Edo. His students included haiku poets and ukiyo-e artists such as Eishōsai Chōki.

Utamaro's first published work may be an illustration of eggplants in the haikai poetry anthology Chiyo no Haru[d] published in 1770. His next known works appear in 1775 under the name Kitagawa Toyoaki,—the cover to a kabuki playbook entitled Forty-eight Famous Love Scenes which was distributed at the Edo playhouse Nakamura-za. As Toyoaki, Utamaro continued as an illustrator of popular literature for the rest of the decade, and occasionally produced single-sheet yakusha-e portraits of kabuki actors.

The young, ambitious publisher Tsutaya Jūzaburō enlisted Utamaro and in the autumn of 1782 the artist hosted a lavish banquet whose list of guests included artists such as Kiyonaga, Kitao Shigemasa, and Katsukawa Shunshō, as well as writers such as Ōta Nanpo (1749–1823) and Hōseidō Kisanji (ja). It was at this banquet that it is believed the artist first announced his new art name, Utamaro. Per custom, he distributed a specially made print for the occasion, in which, before a screen bearing the names of his guests, is a self-portrait of Utamaro making a deep bow.

Utamaro's first work for Tsutaya appeared in a publication dated as 1783: The Fantastic Travels of a Playboy in the Land of Giants,[g] a kibyōshi picture book created in collaboration with his friend Shimizu Enjū, a writer. In the book, Tsutaya described the pair as making their debuts.

At some point in the mid-1780s, probably 1783, he went to live with Tsutaya Jūzaburō. It is estimated that he lived there for approximately five years. He seems to have become a principal artist for the Tsutaya firm. Evidence of his prints for the next few years is sporadic, as he mostly produced illustrations for books of kyōka ("crazy verse"), a parody of the classical waka form. None of his work produced during the period 1790–1792 has survived.

Height of fame
In about 1791 Utamaro gave up designing prints for books and concentrated on making single portraits of women displayed in half-length, rather than the prints of women in groups favoured by other ukiyo-e artists.

In 1793 he achieved recognition as an artist, and his semi-exclusive arrangement with the publisher Tsutaya Jūzaburō ended. Utamaro then went on to produce several series of well-known works, all featuring women of the Yoshiwara district.

Over the years, he also created a number of volumes of animal, insect, and nature studies and shunga, or erotica. Shunga prints were quite acceptable in Japanese culture, not associated with a negative concept of pornography as found in western cultures, but considered rather as a natural aspect of human behavior and circulated among all levels of Japanese society.

Later life
Tsutaya Jūzaburō died in 1797, and Utamaro thereafter lived in Kyūemon-chō, then Bakuro-chō, and finally near the Benkei Bridge.[19] Utamaro was apparently very upset by the loss of his long-time friend and supporter. Some commentators feel that after this event, his work never reached the heights previously attained.

A law went into effect in 1790 requiring prints to bear a censor's seal of approval to be sold. Censorship increased in strictness over the following decades, and violators could receive harsh punishments. From 1799 even preliminary drafts required approval. A group of Utagawa-school offenders including Toyokuni had their works repressed in 1801. In 1804, Utamaro ran into legal trouble over a series of prints of samurai warriors, with their names slightly disguised; the depiction of warriors, their names, and their crests was forbidden at the time. Records have not survived of what sort of punishment Utamaro received.

The Ehon Taikōki (ja), published from 1797 to 1802, detailed the life of the 16th-century military ruler, Toyotomi Hideyoshi. The work was widely adapted, such as for kabuki and bunraku theatre. When artists and writers put out prints and books based on the Ehon Taikōki in the disparaged ukiyo-e style, it attracted reprisals from the government. In probably the most famous case of censorship of the Edo period, Utamaro was imprisoned in 1804, after which he was manacled along with Tsukimaro, Toyokuni, Shuntei, Shun'ei, and Jippensha Ikku for fifty days and their publishers subjected to heavy fines.

Government documents of the case are no longer extant, and there are few other documents relating to the incident. It appears that Utamaro was most prominent of the group. The artists might have offended the authorities by identifying the historical figures by name and with their identifying crests and other symbols, which was prohibited, and by depicting Hideyoshi with prostitutes[l] of the pleasure quarters. Utamaro's censored prints include one of the daimyō Katō Kiyomasa lustily gazing at a Korean dancer at a party, another of Hideyoshi holding the hand of his page Ishida Mitsunari in a sexually suggestive manner, and another of Hideyoshi with his five consorts viewing the cherry blossoms at the temple Daigo-ji in Kyoto, a historical event famous for displaying Hideyoshi's extravagance. This last displays the names of each consort while placing them in the typical poses of courtesans at a Yoshiwara party.

Death
Records give Utamaro's death date as the 20th day of the 9th month of the year Bunka, which equates to 31 October 1806.[9] He was given the Buddhist posthumous name Shōen Ryōkō Shinshi. Apparently with no heirs, his tomb at the temple Senkōji (ja) was left untended. A century later, in 1917, admirers of Utamaro had the decayed grave repaired.