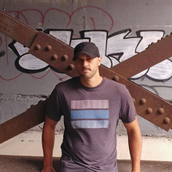 Kevin Peterson was born in 1979 in Elko, Nevada. After a childhood which included stints in Nevada, Michigan and Washington, Kevin arrived in Texas in 1996. He studied art and psychology at Austin College in Sherman, TX. He received degrees in Fine Art and Psychology in 2001.

Kevin pursued a career in Social work after graduating. He worked as a Probation Officer in Austin for 3 years.

During this time, difficulties with drugs and alcohol plagued his life and eventually led to an arrest and the loss of his job. While in a drug/alcohol treatment facility, Kevin rediscovered his love and passion for creating art. He decided to pursue this passion after completion of the treatment program.

Kevin has been sober since July 30, 2005 and has been immersed in his art ever since.

Kevin now makes his home in Houston, TX where he works out of Winter Street Studios.
more >
2