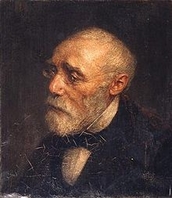 Jozef Israëls (1824-1911)
Jozef Israëls was born into a Dutch Jewish family. At the age of eleven he started painting and drawing lessons at Groningen’s Akademie Minerva. In 1842, he went to Amsterdam to study under painters Jan Adam Kruseman and Jan Willem Pieneman. He later visited Paris, where he perfected his academic style of painting. He subsequently visited Germany, studying the German Romantic artists.
Despite his training, Israëls did not devote his career to painting historical scenes. While recuperating from an illness at the Dutch fishing village of Zandvoort, he was appalled by the tragic lot of the fishermen and their families. His sober, restrained paintings depicting life in the fishing village earned him international fame. Critics compared his impasto brushwork, his warm colours and his use of chiaroscuro with the work of Rembrandt. Israëls taught numerous pupils, among them his son Isaac.
more >
3