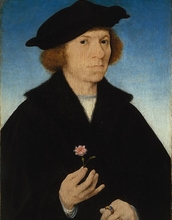 An active member and co-deacon of the Guild of Saint Luke of Antwerp, he is known mostly for his religious works and portraits of royalty. As a skilled technician, his art shows sensitivity to color and a unique solidarity of figures. He was one of the first to introduce broad landscapes in the backgrounds of his paintings, which would become a popular technique of sixteenth century northern Renaissance paintings.

He was the father of Cornelis van Cleve (1520-1567) who also became a painter. Cornelis became mentally ill during a residence in England and was therefore referred to as 'Sotte Cleef' (mad Cleef).