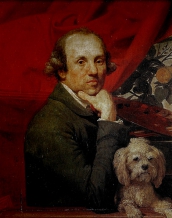 Known primarily as a painter of portraits, conversation pieces and theatrical subjects, Zoffany (1733–1810) was born Johannes Josephus Zauffaly, in Frankfurt-am-Main, Germany. The son of an architect and court cabinet maker, he was brought up at the court of Alexander Ferdinand, Prince von Thurn und Taxis, and enjoyed court patronage throughout his career. When the Prince took up residence at Regensburg, Johann was apprenticed to a local painter, Martin Speer (c.1702-65). Upon completion of his apprenticeship, he made the first of two trips to Rome in 1750, studying with the portrait painter Masucci. On a second trip a short time later, he made the acquaintance of Piranesi.

Zoffany arrived in England around 1760 but, hindered in part by his poor English, initially was obliged to take work for the clockmaker Stephen Rimbault, painting scenes for clock-faces. He then worked in the studio of Benjamin Wilson (1721-88), a minor portraitist, as a drapery painter. His career in England was established when the actor-manager David Garrick became his first major English patron. Zoffany painted four conversation pieces of the Garrick household in 1762, as well as numerous theatrical pictures which brought him to the attention of the public and, more importantly, Queen Charlotte, who became his patron.

Zoffany exhibited at the Society of Artists from 1762 to 1769. He was nominated by George III for membership in the Royal Academy in 1769, exhibiting there from 1770 to 1800. Between 1772 and 1778 he worked primarily in Florence, where he painted The Interior of the Tribuna at Florence (Royal Collection). He returned to London in 1779 but, after a falling out with the King and Queen over his Tribuna, went to India in 1783, remaining until 1789. By 1809, according to the diarist Farington in his entry for 14 March of that year, 'Zoffany's faculties were gone. He is become childish' (Kathryn Cave (ed.), The Diary of Joseph Farington, IX, New Haven and London 1982, p.3421). He died at his home at Strand-on-the-Green and is buried in Kew Churchyard near London.