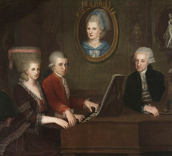 He was born at Pressano, in the Tyrol, in 1736. He studied under Lorenzoni, an Italian artist and after travelling in Italy, Germany, Hungary, and France, he settled at Burghausen. Felix Joseph von Lipowsky (de) estimated that della Croce painted 5000 portraits and 200 historical pictures. There are many altar-pieces painted by him in the churches of Bavaria. He died in 1819. His son, Clemens de La Croce, who was also a painter, was born at Burghausen in 1783 and died in 1823.