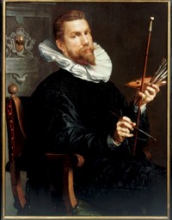 Born in about 1566, this artist (whose surname is also recorded in such variant forms as Wttewael, Uytewael, Utenwael, and Wtenwael) was the son of Anthonis Jansz Wtewael, an Utrecht glass painter. Karel van Mander I (Netherlandish, 1548 - 1606) records that Joachim worked for his father until the age of eighteen, when he began to study oil painting with the Utrecht artist Joos de Beer (d. 1591). Abraham Bloemaert (Dutch, 1564 - 1651) was also a pupil of De Beer.

In 1586, after two years with De Beer, Wtewael traveled to Italy in the retinue of Charles de Bourgneuf de Cucé, bishop of Saint Malo. He worked for the bishop for the next four years—two of them in Padua and two in France—before returning to Utrecht. In 1592 Wtewael joined the Utrecht Saddlers’ Guild, because at that time the city had no artists’ guild. When one was established in 1611, Wtewael was a founding member. He was also active in various spheres unrelated to the arts, notably local politics, serving on Utrecht’s city council in 1610, and again from 1632 to 1636. A Calvinist and staunch patriot, he assisted in 1618 in the overthrow of the Remonstrant magistracy of Utrecht and its replacement with a Calvinist administration loyal to the House of Orange. Other activities included running a flax and linen business, to which, Van Mander complained, Wtewael devoted more energy than he did to his art.

Nonetheless, as Van Mander acknowledged, Wtewael found time to produce a considerable number of paintings. Surviving works range in date from the early 1590s to 1628 and vary considerably in size, support, and subject. Although the majority represent biblical and mythological subjects, Wtewael also executed portraits and genre scenes. Stylistically, he was influenced by a number of different schools, from Venetian and Tuscan to Dutch, notably the work of the Haarlem mannerists Hendrick Goltzius (Dutch, 1558 - 1617) and Cornelis Cornelisz van Haarlem (Dutch, 1562 - 1638). Wtewael was one of the few Dutch artists who did not abandon mannerism after the early 1600s, and his oeuvre demonstrates no clear stylistic evolution.

Wtewael died in Utrecht on August 1, 1638, having survived his wife, Christian van Halen, by nine years. The couple had four children, one of whom, Peter (1596–1660), was a painter who worked in his father’s style.