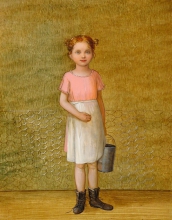 Artist Jennifer Li grew up in Mill Valley, California. She lived, studied, and painted in New York City for nearly twenty years before moving to the woods of northwest Montana in 1998. She is married to the artist Nicholas Oberling.

Jennifer Li's unusually meticulous oil painting technique is grounded in the varnish mediums of the Dutch Golden Age. The New York Times has described her work as "straightforwardly beautiful" with "an element of the weird". Her work has been noted for its color and luminosity, its imaginative and evocative content, and for the high quality of her technique.

Jennifer Li studied painting for twelve years at the Art Students League of New York under distinguished realist painters Harvey Dinnerstein and Frank Mason. She has been painting professionally since 1990. Jennifer Li is currently represented by the Beartooth Gallery of Red Lodge, Montana; Gallery Bergelli of Larkspur, California; the Chrysalis Gallery of Southampton, New York; the Dana Gallery of Missoula, Montana; the Davidson Galleries of Seattle, Washington; and the Going-to-the-Sun Gallery of Whitefish, Montana.
more >
12