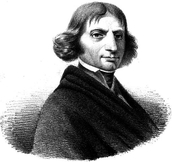 Jean-Simon Berthélemy (5 March 1743 – 1 March 1811) was a French history painter who was commissioned to paint allegorical ceilings for the Palais du Louvre, the Luxembourg Palace and others,[1] in a conservative Late Baroque-Rococo manner only somewhat affected by Neoclassicism.

Berthélemy was born in Laon, Aisne, the son of a sculptor, Jean-Joseph Berthélemy,. He trained in the atelier of Noel Hallé, a professor at the Académie royale de peinture et de sculpture and made his first reputation in the 1760s; after reaching second place in 1763, he won the Prix de Rome of the Académie in 1767. An early commission was for a suite of decorative paintings under the direction of the architect Jean-Gabriel Legendre for the Hôtel de l'Intendance de Champagne at Châlons-sur-Marne, of which the artist only completed six overdoors, much in the manner of François Boucher and delegated the rest of the commission to a fellow pupil at the Académie.[2]

Berthélemy's master Hallé provided cartoons for the royal tapestry manufacture of the Gobelins, where he was appointed superintendent in 1770; Berthélemy was called upon to provide cartoons for the weavers as well. His Death of Etienne Marcel (1783) of which the oil sketch survives, was woven in the series Histoire de France. [source]
more >