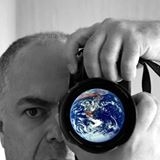 Jean-François Réveillard aka JfR is an artist living in Switzerland, sharing is time between Zürich, Paris and the world.

JfR create and made concept In a spirit of being *here and now* using some Japanese technique of calligraphy for painting and drawing - Also involved since 80's in digital media, video art, virtual world, and now in 3D printing founder in 97 of one of the first webtv in Europe, JfR like to define himself as a "Cross Media Picture Maker".
more >
3