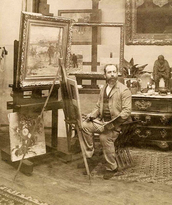 Jean-François Raffaëlli (April 20, 1850 – February 11, 1924) was a French realist painter, sculptor, and printmaker who exhibited with the Impressionists. He was also active as an actor and writer.

He was born in Paris, and showed an interest in music and theatre before becoming a painter in 1870. One of his landscape paintings was accepted for exhibition at the Salon in that same year. In October 1871 he began three months of study under Jean-Léon Gérôme at the École des Beaux-Arts in Paris; he had no other formal training.[1]

Raffaëlli produced primarily costume pictures until 1876, when he began to depict the people of his time—particularly peasants, workers, and rag pickers seen in the suburbs of Paris—in a realistic style. His new work was championed by influential critics such as J.-K. Huysmans, as well as by Edgar Degas.