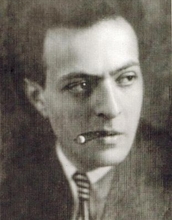 The University of Texas at Austin held an exhibition dedicated to his works in 1981. [source]
more >
16